Posted on November 21, 2016 by groundswellbasscoast 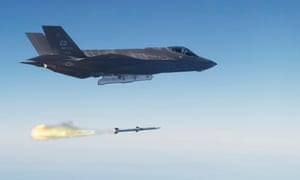 Every gun that is made, every warship launched, every rocket fired signifies, in the final sense, a theft from those who hunger and are not fed, those who are cold and are not clothed. This world in arms is not spending money alone. It is spending the sweat of its labourers, the genius of its scientists, the hopes of its children -words of wisdom by President Dwight Eisenhower

USA is spending 28 times as much on military security than climate security. Public sector investment of $55B per year is required to meet the challenge, according to the study. With $21bn in the 2017 budget, shortfall is $34bn.

F-35 fighter plane program is prime candidate for big cuts: the most expensive weapon ever designed, complete with massive cost overruns: the military admits that this plane just doesn’t work. If we turn back now, IPS says we could build enough offshore wind farms to power 320,000 homes for millions of people.

Cut Navy program close-to-shore combat ships would provide enough funds to retrain more than 150,000 coal industry workers. The ships have been plagued with mechanical errors. Our own Government Accountability Office says the “actual lethality and survivability performance of LCS is still largely unproven through realistic testing”. Others have called the ships an outright “waste”. Congress could harness additional savings by reducing service contracting and canceling other wasteful/unnecessary weapons programs.

Where boats once sat docked in my hometown marina, only dust remained. Climate scientists are telling us United States is not immune to instability and infighting that will occur when populations are forced to fight over food and water. They need only look to California for confirmation, where northerners and southerners argue fiercely over water access.(See also Murray-Darling water “plan” in Australia)

The only practical solution to curb unrest, suffering and death here and abroad is a massive redistribution of government money.

This is on behalf of local climate change group. Material is selected by Bernie McComb and does not necessarily represent opinion of whole group.
View all posts by groundswellbasscoast →
This entry was posted in Events local and tagged climate change, climate emergency declaration, military spending. Bookmark the permalink.