Posted on March 31, 2016 by groundswellbasscoast 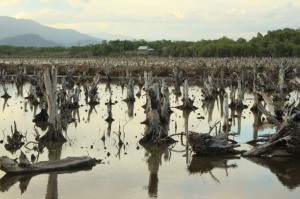 Which of the world’s great forests store the most carbon per hectare? The dense tropical rainforests of the Amazon, Borneo, the Congo or Papua New Guinea? The vast northern forests of Canada and Siberia, or the towering mountain ash forests of Victoria and Tasmania?

None of the above.

In fact (counting carbon stored in soils), mangrove forests store the most carbon per hectare…Mangroves are being destroyed by conversion to agriculture, aquaculture, tourism, urban development and over-exploitation. Indonesia’s original endowment of 4.2 million hectares of mangroves has been reduced to less than 2.4 million hectares, with at least 60% of this loss due to conversion to aquaculture.

(Note – mangroves, with sea grass and salt bush can absorb 40 times more CO2 than forest and sequester as long as 10,000years in sub surface silt. Recently named Blue Carbon, in Paris, it was proposed for proper integration into carbon balance analysis by our Minister Greg Hunt – but will he stop plans for container port in Westernport, requiring mega dredging of carbon laden silt?)

This is on behalf of local climate change group. Material is selected by Bernie McComb and does not necessarily represent opinion of whole group.
View all posts by groundswellbasscoast →
This entry was posted in Events local and tagged aquaculture, blue carbon, Greg Hunt, Indonesia, mangroves, Westernport. Bookmark the permalink.