Renewables agency stripped of members and run by bureaucrat

Posted on February 29, 2016 by groundswellbasscoast 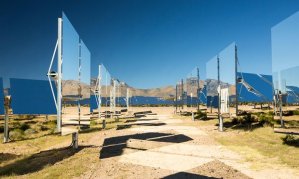 All appointed board members of the Australian Renewable Energy Agency have had their terms expire and have not been replaced, leaving it governed by the secretary o
f the Department of the Environment, Guardian Australia has learned. ..The same thing happened in 2014 while Tony Abbott was prime minister, and the move has now been criticised as an attempt by the Turnbull government to remove the i
ndependence of the agency…According to legislation, the board must consist of the secretary of Dept of Environment and up to six others appointed by the minister. The agency can operate with the secretary being the only board member, since it reaches quorum when a majority of the board members are present, which now occurs with one…Parliament sits for the first time in 2016 on Tuesday, with bills abolishing both the renewable energy agency (Arena) and the Clean Energy Finance Corporation still before parliament, despite having been rejected by the Senate. Signs indicate the Turnbull government intends to keep them…Arena is tasked with investing in emerging renewable energy technologies, while the CEFC invests in commercially viable renewable energy technologies. Disruption in the government’s handling of renewables has been blamed for a huge drop in clean energy investment in Australia.

This is on behalf of local climate change group. Material is selected by Bernie McComb and does not necessarily represent opinion of whole group.
View all posts by groundswellbasscoast →
This entry was posted in Events local and tagged ARENA. CEFC, Greg Hunt, Tony Abbott. Bookmark the permalink.